Only the Paranoid Survive: Three Steps to Being a Disruptive Innovator 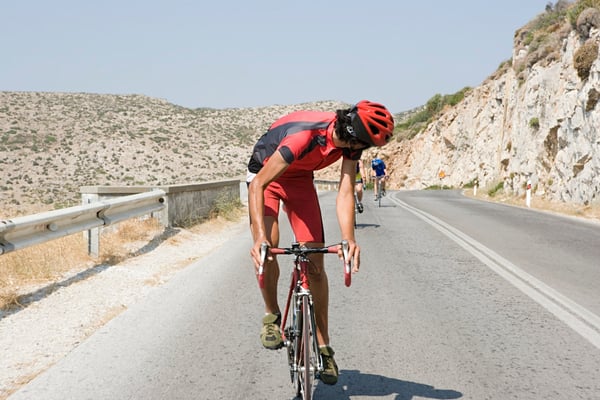 There is a much-ballyhooed Harvard Business School case study which examines the competition between athletic shoe companies Nike and Reebok -- before Nike became the behemoth it is today, and when Reebok was a tiny company making its first attempts at scaling up.

Nike, at the time, was a “runner’s runner” shoe, aimed at the hardcore, “rise-at-5 a.m.-and-run-like-the-wind” customer. Nike’s signature advertising visual at the time was very compelling: The perspective, down the length of a deserted Manhattan avenue in the early morning hours. A glimmer of the sunrise peeked around one building; no traffic or people were around – with the exception of a lone runner, a tiny figure against the cityscape. It characterized what Nike stood for – hardcore training -- and that famous ad resonated hugely with Nike users. It was about the discipline and fulfillment of running. Shoe comfort at the time, while adequate, clearly was secondary.

Reebok, smaller and newer to the athletic shoe marketplace, went a different way. First, Reebok’s shoes were comfortable. It’s not clear if Reebok had the foresight to understand that in about a decade, EVERYONE would be wearing “casual” athletic shoes, or if they simply saw an opportunity to improve the user experience, but comfort was their gambit at the time. And -- guess what? Their “comfortable” athletic shoe business took off.

Nike, the market leader, barely took notice as Reebok’s business grew geometrically. Within two years, Reebok’s runaway success could no longer be ignored by Nike, which acknowledged the upstart’s emergence with a combination of disdain and annoyance. After all, they thought, athletic shoes were for RUNNING, not comfort or lounging around on Saturdays. They dismissed Reebok’s continued growth as a fad -- something that simply wouldn’t last! Or so they thought.

Flash forward less than a decade, and Reebok changed the entire athletic shoe landscape. “Athletic” shoes today have broadly been adopted as the casual shoe of choice by a wide swath of the populace. Nike, when it finally realized what was happening, had to spend considerable time, effort and money to catch up with the upstart.

Simply put, Nike missed one of the biggest changes to its business, even as it unfolded right in front of its eyes. Why? Perhaps because of “rose colored glasses” syndrome, which goes something like this: When business is good and growing, it’s easy to ignore an emerging competitor. You’ve got your hands full, factories pumping out product, the money rolling in, high fives across the leadership team. What could possibly go wrong?

Andy Grove, the former genius CEO of Intel, had a great phrase that he learned the hard way in the tough-as-nails semiconductor business – “only the paranoid survive.” Andy watched as competitor after competitor grew huge -- and then went out of business as a result of thinking that the good times would just roll on forever.

In medicine, paranoia is a condition to be treated. In business, however, paranoia can actually be an ally -- a tool to remain competitive. Grove drilled that into the Intel culture: “There is no guarantee of a tomorrow as good as today. Competitors want to destroy our company, and we have to be better, smarter, and faster if we are going to win and survive.”

That mindset was spun into a bestseller by Mr. Grove.

Harvard professor Clayton Christensen calls this competitive mastery “disruptive innovation,” and it can be seen in its full glory when we behold such “here today, gone tomorrow” stories as Uber (hot yesterday, now having its lunch eaten by Lyft) and Blockbuster (which crumbled under the weight of now dominant Netflix).

Similarly, HP and Oracle thought they had cornered the market on “enterprise” business; today a not-so-little “startup” called Amazon Web Services is gobbling up business of small and large companies alike. Desktop-based Microsoft finally woke up, and now it too is a player in the cloud. What’s next?

So, as you think about your business, which one are you? Are you Nike – comfortable, not worried, not feeling a need to look deep and hard at trends in your marketplace? Or are you like Andy Grove – paranoid – always on the lookout for an upstart competitor?

As we start 2018, here are three ways to make sure you maintain your paranoia, in a bid to be a disruptive innovator:

Asking the three questions above, and digging into the key trends, should be part of a disciplined annual planning process. This goes way beyond setting budget targets for next year, or allocating capital – all important activities. It means stepping back with some simple data -- thinking carefully about how your business is positioned and what is going on in the category -- that you can use to accelerate growth, or to address an emerging threat.

You, as the CEO, own this responsibility. Hopefully, you did this last year as part of 2018 planning, but if not, it’s never too late. If you are busy, get someone to help you who can stand back from the day-to-day issues, and take a simple, fact-based look at what’s happening in your category. You’ll be glad you did. Getting ahead means growth, more profits, and a better place to work. Getting behind simply is not an option.