More and more companies are realizing that transitioning their business to an as-a-Service model is the answer to driving higher growth and more profitable and stable revenue streams. In Part 1 of this article series, you learned how to know if it's time to think about embracing an as-a-Service model.

This series makes no assumptions about prior experience with as-a-Service models. It is equally applicable to companies that have software or technology at their cores and those that don’t. A massive amount of content has been written on related topics and the main goal here is not to repeat or replace that, but to simplify and help you begin – or at least consider – the journey.

To put it simply, an as-a-Service business model is one where customers ‘subscribe’ to an offering that they receive the value for over time vs. paying a one-time fee and receiving most of the value up front. Such business models have been used in the classic services sector for many years but the more recent innovation is that companies that had previously sold their offering as a one-time ‘product’ are now converting to subscription business models.

Often such models are referred to as Something/Anything-as-a-Service or XaaS. For the remainder of this series I will use the XaaS acronym to generically refer to such models.

Somewhat related to this concept are so-called ‘on-demand’ businesses that may not charge an ongoing subscription fee but are always available to use, just like a XaaS service would be. Obvious examples are Uber and Lyft, which provide on-demand Transportation-as-a-Service. Although Uber does not (currently) charge an ongoing subscription fee to its customers, many elements of this model are similar to a true XaaS business and much of the discussion in this series still applies.

Who is doing it?

XaaS is not a new concept. Early examples of the business model include:

Beginning in the late-1990’s, the easy distribution of digital content enabled by the Internet has created many consumer-oriented XaaS offerings, some of which you probably use without realizing they are XaaS, including:

The current wave of XaaS model transitions is happening in businesses that you would not automatically think of as being obvious candidates. These include:

As you can tell from these examples, almost every possible kind of business is embracing the XaaS model these days. No matter what the offering, the advantages to both buyers and sellers described next remain fundamentally similar.

Markets (including both sellers and buyers) are increasingly adopting XaaS models due to some very clear benefits.

The point about customers being ‘stickier’ is worth elaborating. This is a funny way of saying that customers are stuck with you for the long term. For offerings that aren’t sold as a subscription, the buyer must make a repurchase decision every single time. At that decision point, it is possible (and often tempting) for the buyer to reconsider other options or discontinue the new purchase altogether. But with the subscription model it is simply easier for the buyer to continue with the status quo (as long as the outcomes remain valuable).

From your own personal experience, how many subscriptions of all sorts (i.e., magazine, cable, phone) do you stick with just out of natural momentum? If you are like me, it’s quite a few. The same dynamic applies with B2B purchases where the inclination to stick with what works today is even stronger since the risk of change can be significant.

Sounds good? Increasingly, the market thinks so too.

Characteristics of a XaaS model

To better assess how closely aligned your current business model is with a XaaS model, complete the following table. For each factor, assign your company between 0 and 10 points. 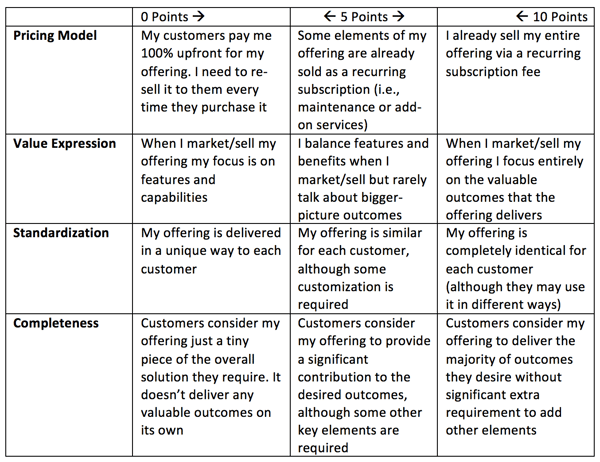 Score yourself as follows:

Note that – even if your business has a current score of zero points – this does not mean that a XaaS transition is impossible or ill-advised. The advantages of such a transition may still be very significant for you. But it does mean that the level of change that will be necessary is greater and the path ahead will be somewhat more challenging. In the next installment of this series, we will break down that path into more detail.

If you have made it this far, subscribe to my blog at the bottom of this page and read Part 3 of this series that will dive more deeply into specifically how to convert your business to the XaaS model and how to take it to market efficiently and effectively.