Is There Any Role for Traditional Marketing Today? 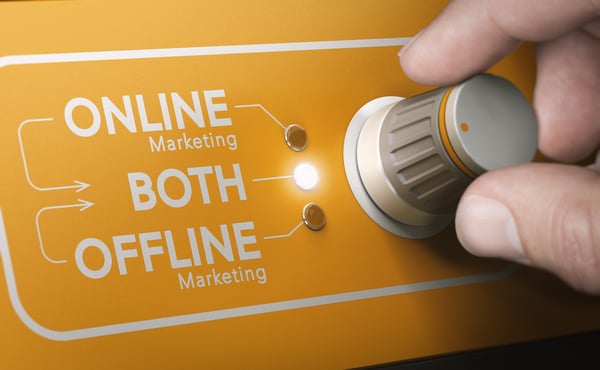 By Atul Minocha and Paul Sparrow

As we try to determine whether old style, hand-to-hand, touch-it-and-feel-it marketing can compete in today’s switched on, always moving world, is it possible that a bird feather holds the key to the question posed in our headline?

The answer requires a bit of insight into how we got to this seminal moment which by the way is a precarious place for the newspapers, billboards, mailers, radio and even TV ads comprising what is predominantly known as “traditional marketing.”

As colleagues at Chief Outsiders, the country’s largest provider of outsourced fractional marketing executives, we both get a steady diet of the traditional-versus-digital marketing kibble – and there’s no arguing that digital represents new opportunities. Anything that happens on a computer or connected device resides in the digital strata, and anything sent to it can be endlessly targeted, measured, and personalized.

In fact, a recent study found that average daily time spent with digital media in the United States has leapt from just 2.5 hours in 2011 to a projected eight hours in 2022, with traditional media consumption declining from 7.5 hours to 4.5 hours in the same period.

Maybe. But maybe not. There is a compelling counter argument. For example, what about billboards? Ads on public transit? Magazines and newspapers? They’re everywhere! Heck, people STILL pack their way into trade shows, marketing events, seminars and such. Just like you, our mailboxes still overflow with the printed vestiges of a bygone era!

Well, you’re not wrong in letting digital occupy the frontal lobe of your marketing mind – but there are two quite notable reasons propping up traditional media in a way that even the gadget-heads might be well advised to consider.

You’ll note that all of those traditional media outlets look a little different than they did 60 years ago. Billboards are no longer paper-based but are now digital, cycling through several ads per minute. Those direct mailers and bus ads are covered with QR codes, which you can aim your phone at to receive valuable interactions. Even your TV can be targeted, digital-style, with ads that are more relevant to your buying itches.

Further, digital has become a premium product, with a requisite premium price! Not too long ago, in a bid to get advertisers hooked, it was free – or dirt cheap – to put a message (usually text-based) up on the social channels. Now, competition has truly jacked up the price – and created a highly cluttered landscape that can be overwhelming to the consumer. This has opened the door for traditional media to provide a less ADD-centric and more cost-effective alternative to stand out.

Even smart people like us (modest, too) surf at the crest of the digital wave. Companies have become so convinced of the power of digital that the cost of entry for even the basics is becoming mind-bogglingly expensive. YouTube channels and TikTok ads – once the domain of the home-baked – are becoming slicker in production quality and are requiring more resources to present professionally.

One important note: Though we’ve only seen the tip of this trend, digital fatigue – as a result of COVID – might be a factor. After being cooped up for almost two years, the shift to digital communication – ballyhooed at first – may now be backsliding. We’ve seen webinar attendance drop and participation increase at in-person events, dinners, and cocktail mixers.

We believe that a smart company, one with sober insights and strategies regarding their customer’s journey, can take a blended approach to traditional media by injecting what they’re doing in digital media into the more traditional channels. They can gain traction; heck, even stand out from the crowd, since it’s less noisy in the real world.

So back to the bird feather. A couple of years ago, Atul received a direct mailer from Audi, the car manufacturer. It came tucked in a three-dimensional brochure, which itself was packed into a rigid FedEx box, and shipped via express (equating to urgency) to the front door.

It was a beautiful package, almost “Apple-esque” in its presentation, and though he didn’t rush out and purchase a car that moment, Atul can still recall the campaign, several years hence, in vivid detail. Sure, it was more expensive for Audi to communicate in such an elegant manner – far more expensive, let’s say, than a Facebook ad – but we’d challenge you to recall ANY digital ad from even two weeks ago! Can you?

The lesson here is that traditional marketing has a decided seat at the table in the consideration game today – but the quality of the impact, and the relevance of the targeting, still holds the key to success. Audi perhaps could have reached 100,000 people in the local market with a Google ad, but using keen, digitally sourced demographic data, they can also choose 100 likely purchasers and invest the same spend in something that has true stopping power.

How about you? At your company, have you gone all-in on digital without thinking about a continuing role for traditional media?