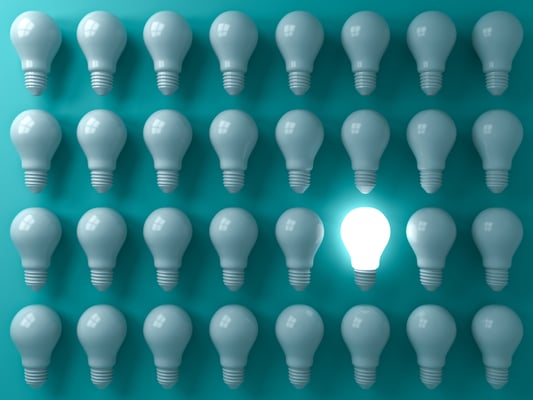 One of the most influential Apple commercials ever made continues to resonate with me, nearly a quarter century after it was first released. Adorned with the tagline, “Think Different,” the Richard Dreyfus-narrated spot celebrated how non-conformist inventors pushed, annoyed and irritated the established order to change the world. The commercial underscored the convention-breaking culture at Apple – and, as they say, the rest is history.

While many saw the Apple commercial as a call to a particular type of idealism, in today’s society, the message “Think Different” has a very practical purpose that can be applicable to the most routine of businesses today. Creating growth in your business in today’s marketplace means doing something different enough to put the business on a faster trajectory.

So how can you, and your team, think different as a means of accelerating success?

One starting point would be to question even the most basic assumptions. Consider Tesla, the automotive startup with a stock price now pushing $1,000 per share. What has Tesla done to propel their cars so rapidly into the public consciousness – and their driveways? They question the most basic car-bound conventions. As an example, in the automotive space today, the No. 1 item that drags down satisfaction scores is the entertainment interface. Most car owners find it bewildering to just turn up the volume, let alone access any of the advanced features. And, worse -- the system quickly becomes dated, to the point that your three-year-old car looks like an antique compared to the interface on your iPhone. Want a better interface? Forget about any help from the dealer – the typical answer is to wait for the model to be refreshed several years down the line.

So what did Tesla do? They pioneered the process of delivering over-the-air updates – not just to the entertainment stack, but to the entire car! In Tesla’s commitment to continuous improvement, every car, no matter how old, gets the latest operating system in this manner. And the updates do a lot more than add the latest radio station. Tesla’s downloads have been known to improve braking, collision avoidance, and battery life. So your car is always current, and always looks and drives current.

Take another example. A new airline is launching soon called Breeze, which again, will apply a “think different” approach to an often-frustrating experience. In the U.S., as major airlines have merged, scaled, and sought to be more efficient, they have eliminated routes to small cities – instead, shuttling passengers through fortress-like hubs and, in the process, substantially increasing the transit time for those who originate their travel from small and middle market cities and towns. Also, they tend to run their aircraft as many hours in the day as possible , as a means of wringing out every last bit of return from that investment. Finally, they only serve locations that fill the planes and ideally with flights that run for many hours.

What is Breeze doing? Sensing pent up demand in the cities where the major airlines have uprooted, they are adding low capital and low expense state-of-the-art aircraft that allows them to fly fewer hours per day, while still earning a return. As a result, so called “unprofitable” markets for the majors are now going to be quite profitable for Breeze. What’s different? They will fly you from middle market to middle market directly – no stops. Half the time. No change in a mega-hub. In the process, they likely will generate enormous loyalty and cultivate trips from a new, incremental customer base. All because they thought about the current mid-market customer experience, and figured out how to make it a whole lot better.

How can you re-think assumptions in your business to build new customers, drive loyalty, and accelerate growth? Start by considering what could be your equivalent of the Tesla or Breeze experiences. Here are some examples:

Take some time to THINK DIFFERENT for your business. Talk with your customers about what they love about your company, and what they can’t stand. Then, get rid of what is a bone of contention, while doubling down on what it is that they find delightful. Start with something simple like re-orders, customer response time, or removing the little things that really bug your customers and clients. Pick one every quarter. THINK DIFFERENT, and GROW!