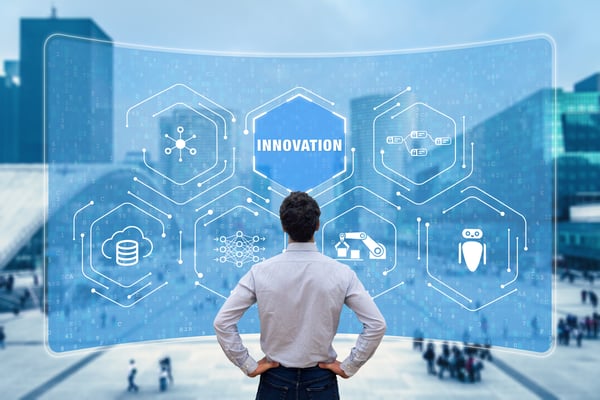 Blog 1:Introduction to What it Takes to Innovate

Sometimes, there’s a razor-thin margin between success and failure. In the world of shaving, this is more than a figurative statement.

Just ask the folks at Gillette, which dominated the $3.5 billion market for razors and accessories for more than a century. At Gillette, innovation mostly consisted of adding the occasional blade to its disposable cartridges, but there was little incentive to otherwise rock the boat of its delightful recurring-revenue model (after all, hair continues to grow, whether we want it to or not).

However, about a decade ago, Gillette’s standing at the top of the ivory tower was challenged by none other than a teddy bear – more specifically, the one that starred in the first commercial for an upstart little company called Dollar Shave Club.

Dollar Shave Club noticed that, though the razor itself was still quite relevant, the way they were marketed and sold was quite antiquated and inconvenient. Prices remained artificially high, and the whole business had a stodgy image. Playing disruptor, Dollar Shave Club entered the market with a far less expensive pricing model, and an “auto-ship” process that would ensure shavers had a fresh blade at the ready without leaving the comforts of home.

Along with fun commercials, resonant social media and globalization helped prop DSC up with $200 million in revenue in its first five years – eventually leading an innovation wave that nibbled $17 billion away from the large shaving brands between 2013 and 2017.

It’s a time-honored “David and Goliath” story, but one that should serve as a stark reminder. No company is immune to watching its market share shaved away at the hands of a more innovative competitor or upstart. And without a cultural commitment to innovation and new product development, it’s almost a certainty.

In our experiences, there are three core elements that innovative companies share:

The Ability to “Stay Paranoid”: This comes from a quote by Andy Grove, former CEO of tech giant Intel, who once stated, “Only the paranoid survive.” Though it may seem to be a difficult way to live, Grove’s point is well taken – you need to be constantly aware of what will disrupt your markets; how such disruption will impact you; and what you can do to stay a few beats ahead.

The Ability to Stay Disciplined: A commitment to innovation requires a certain amount of moxy – the ability to pivot on a dime if the data and tradewinds are blowing you in a different direction. This can be difficult for big companies that become known for a certain brand and set of capabilities. Kodak learned the hard way that it’s unwavering commitment to print film products caused them to miss a very big digital boat. On the other hand, Microsoft saw its on-premise solutions falling out of favor and created a cloud-based subscription model, Office 365, that will ultimately ensure its survival.

Think about what companies had to accomplish during the pandemic as a more recent, and perhaps, for you, relevant example. Angus worked with a company last year that developed on-premise backup solutions for small businesses. All of a sudden, with no notice, the majority of professionals were working from home, rendering the company’s core product offering moot. But, now we had executives and remote workers needing to back up their laptops from home – so we changed our roadmap and launched a cloud-based backup service within six months. Though it ultimately cannibalized some of our existing business, it created a new market for us to pursue.

A Focus on Culture: This is the most critical element for any CEO to consider before they embark on their journey to innovate – they have to have the right culture that nurtures the desired behaviors. This includes the appropriate reward system for those who foster innovative thought; a commitment to curiosity (we don’t need time-tellers, we need clock-builders); and the ability to be externally-centric, and make innovation about your customer, their ecosystem, and creating value for them. It’s wonderful to have a cadre of confident and experienced veteran leaders who have led the company to its present success, but it’s better if they are willing to set aside conventions and listen to what the consumers, and the market, are saying.

It is our hope that, in this blog series, you’ll understand the essentials to instilling and implementing a culture of innovation at your company, and which tools are necessary to start making changes. We want you to start thinking of innovation – rather than laurels -- as the foundation upon which your company rests.

In our next blog, we’ll share with you a formula we call phase gate “lite” to achieve reliable, successful, and profitable new product innovation and development.

Check out our LinkedIn Live video on innovation: