The Motive – Lencioni’s Best, With a Catch 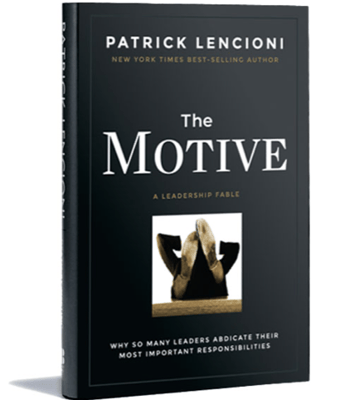 I don’t know about you, but I look forward to a new Patrick Lencioni book like I do the next Grisham novel. Not for entertainment purposes (while they are always a fun read), but from the sheer joy of reading an expression of well-crafted thinking.

In Lencioni’s latest (and greatest) fable and framework – The Motive – Patrick does not disappoint. But there’s a catch. While this may be his most important work, it may become his least popular. Why? Because rather than challenge his business leadership audience with new methods, he’s challenging us with a completely new mindset; and one that many of us will instinctively fight.

It’s Not About You

In Rick Warren’s best seller, “Purpose-driven Life” he begins with a powerful but unsettling phrase that reveals the secret to a fulfilling life: It’s not about you. While his readers are largely professing Christians where this notion is consistent with Biblical teaching, the secular reader who’s expecting self-oriented guidance for their life’s purpose is stunned with this opening challenge.

Similarly, CEOs who are seeking expert insight into developing their leadership skills find themselves challenged from the get-go with Pat’s book, right from the title. What’s my motive for leading? Lencioni does an excellent job of helping us identify with the struggling CEO. He makes it hard for us to even find fault in his approach. That is, until an alternate approach emerges. And we get it: If my leadership role is all about me, I am destined to flounder. The strategy for organizational success is anchored in the success of everyone else. And it’s my job to help them grow, hold them accountable, and see that they manage their organizations similarly. It’s not a comfortable role, at least initially, as it requires “stepping into the danger” but over time, there is joy in seeing the results: People always improving, results always improving.

Early in the book, The Motive presents an instantly re-orienting concept. The CEO who sees their role as holding the high rank of Chief Executive Officer as a reward for decades of hard work will not be as effective as the executive who sees their CEO role as their next opportunity to deliver, to serve and ensure the organization is executing. It requires letting go of the things we “like” to do, in favor of the things we alone can do as the CEO. While this notion is a bit confusing at first, it comes to life as we see the fable unfold and the re-made CEO hero provide example after example of this orientation as a best practice. BUT, it’s not a “practice” or approach at all. It requires the CEO to have a completely different, selfless, perspective. In the end, the CEO-in-trouble yields to this gap in his mindset and becomes an apprentice to the re-made CEO. (Forgive me for the vagueness here; don’t want to spoil the fable)

Won’t Be as Popular, But

To say that a Patrick Lencioni book won’t be popular is a little silly. We’ll see it fly off shelves at Amazon and on the #1 Business Bookshelf in airport giftshops, no doubt. But it’s not likely to be the book one businessperson offers another. It may just be too personal, as it’s not a set of skills to learn, but an entire mindset for leadership from the top. When I saw Patrick publicly kick off the thesis of The Motive back in August 2019 at the Global Leadership Summit, the final transcript was barely days old. And he couldn’t wait to share it. It was clear that he recognized this book as his most important contribution to leadership thinking, while it would not likely be his most popular. But he had to bring these truths to light. He had to speak the kind truth, to step into the danger, to tell CEOs what they need to hear, because he cares about us. He wants to make us better leaders.